How To Stop Tribalism In African Politics 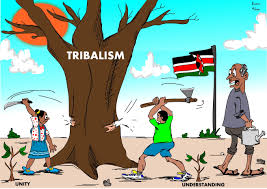 I believe the easiest way to stop tribalism is that no one should be allowed to seek political office in the place they were born or the county they grew up in. e.g. Wajaluo watafute kura ukambani, wakamba north eastern, coastrarians kikuyuni wameru ujaluoni etc. That way they will be forced to understand people from other communities better and be concerned about their issues as passionately as those of their own communities.


They will empathize with them as much as they do their own people, and force citizens to scrutinize leaders better. Otherwise, as long as you are hanging out with 'your people',  expecting to be tribeless is a huge joke and a mockery of the God who created the tribes and their cultures.

Those tribes exist, stereotypes exist because we are different and groups of people tend to behave a certain way. That is the beauty of life. I don't want to be you, but I like you around because in your way, you make me a better me, and I know I make you a better you. Nothing wrong with that.


No preaching, no campaign will make my tribe go away and the pride I feel for my ancestry. This is the feeling most people will have for their people. But for me to live life now in the best way for the next generation as well as myself is to understand their ancestry will be Kenyan, not Luo, Kamba, Giriama, Indian, or Kikuyu. The only way they will be whole is if I understand and relate with them as much as I possibly can.

The first stop is that a leader should be able to relate with Kenyans from all over the country. Living amongst a people and being forced to understand them in their language might be the only way Africa is able to overcome tribal issues created by Mzungus...