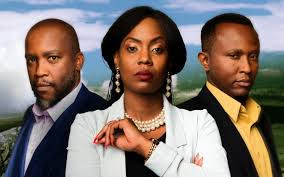 Let me say this upfront, whether or not you have watched The River, Kina is well worth watching. It is a good piece of work and the adaptation brings an interesting angle to the series. Given the history of Swahili and East African series and movies with scenes that can drag on forever, it has credible twists and turns that keep you glued on and when done, hungering for the next episode.

The scriptwriters did a great job of adapting the South African story The River. The change of environment from mining diamonds to spring water was a little unexpected for me however, this alone made the toned-down energy of Kina plausible. Alongside this, a change from living in shacks (The River) to a suburban setting is also believable. Not to say there are no shacks in suburban Kenya. Keeping a familiar naming structure as used in Nairobi makes for a perfect fit. I would say the script is well thought through, except in the instance in the scene with the character Izzy in episode one.

So much for the script. Moving on to the actors;

Overall, I think the casting team made a good effort in getting actors who can act however there is a lack of chemistry among most of the cast. Individually the actors do a good job but the lack of small things like eye contact here, a touch there, similar energy, all seem to be lacking especially in the first episodes. This is evident especially with Nana (Sanaipei) and Fred (Jimmy) who are meant to be hopelessly in love.

The series starts with Nana burying Bella (Allyce) alive. For those who have watched The River one of our biggest questions was whether or not Sanaipei would be able to deliver this scene. I would say she tried however, this is one of the scenes where facial expression, small gestures, and camera angles all contribute to passing on the tension and mood of the main characters. This did not exactly come together and if used as a measure of whether or not one should continue to watch the series can be very misleading. This scene and the next 10 minutes of the first episode are the poorest acts of the series so far. After this, each of the actors does some of their best work yet. Both Sanaipei and Jimmy deliver their characters’ roles despite the evident lack of chemistry in these initial episodes. I would say casting could have been better with these two. They just don’t seem to be good together though they are great individually.

Izzy, (Maina wa Ndungu) after a very disappointing delivery in the scene with Bella’s dad (Mr. Mwakazi) goes on to do a great job. I wonder who gave him those stupid lines to say cause they are just not his character and also do not reflect the picture of a respectful yet shy young man being portrayed either in the story or in reality. I just don’t see it happening in East Africa.

My favorite characters in all said were Brian Kabugi’s character Leo, and Anto Bullet’s characters Albo. They both delivered with no hitch, if not better than, then probably at par with similar characters in The River. Brian definitely has a bright acting career ahead and I think it is sad that his character dies after just a few episodes. Another great act was by Bella’s mother. Much as I am never torn while watching a Kenyan production, she does do the trick when ‘mourning’ her husband.

On the other hand, I found it hard to connect with Bella, hopefully, as the series goes on, she will be able to evoke more emotion and not just deliver her lines. Probably, after watching the parallel character Itumeleng in The River, I expected a more lovable persona. On the other hand, her best friend Trish definitely more than delivers and brings out the depth of friendship the two have.

Bruce Makau takes the role of Nana’s right-hand man. Initially, I was lost for words at what the casting director was thinking. However, around episode 15 I think he has warmed up to his role and is almost naturally getting into character. Probably he is best at acting love scenes but he is a far cry from Zolani, his parallel in The River. His lack of energy may be a great shortcoming if the story continues as in The River. Lindiwe and 'Zozo" in The River have a very unique friendship and chemistry that is not reflected in Kina. It will be interesting to see how this pans out to accommodate the Kina characters' unique strengths in these roles.

Carol, the owner of the neighborhood watering hole does a good job with her character and so do the rest of the characters though I wish Ainea Ojiambo (Detective Juma) would deliver Tshabalala’s shifty, corrupt cop demeanor.

All said I am not disappointed though not ecstatic.

The camera focus is hazy in parts and some scenes could have had better camera angles. Specifically the focus on Nana's face in the first scene as she is burying Bella. Given that it is not a physically exerting process but with so much weight seeing in detail every twitch of features would have helped contribute to the tension. Also, significant parts of the movie have unnecessary scenes and as a result, make one lose focus.

The choice of Score in most tense scenes could be better. The theme song is beautiful but does not match the key themes covered in the series.

Corruption, turpitude, hard work, entitlement, and greed just do not go with the smooth beautiful vocals with no crescendo. The positive themes that also seem to reoccur are dedication, love, and family but the music is not soulful enough to reflect that either.
The wide range of themes intertwined within the story and characters make it easy to understand why a character can have two completely opposite traits and still be credible as in the lead character Nana.

If compared to each other, Kina is a far cry from The River but much better than most adaptations. While the Kenyan actors have brought their best work to the table it would be presumptuous to compare the South African talent at par with the Kenyans. Culture has highly affected the energy and pace of the two productions. However, I believe better directing, editing and good choices of score could have moved the production from average to good.

Putting into consideration all the above and the overall entertainment value, I give this production an average score of 6/10