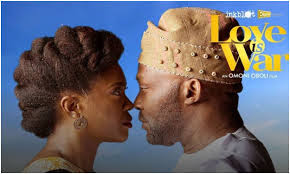 Love is War presents gender and political issues in a fun, interesting, and comical way. This is well thought through, written, and directed.

I will be watching it a few more times. The movie focuses on serious societal issues and presents them in a palatable way making it easy for us to critically explore the topics as relates to African society.

If you are one who enjoys simple storylines with definite good and bad people, hot and cold, no grey areas? This may not be the movie for you. The relationships, especially with the lead couple, may stretch your imagination more than you would want. It may be a little confusing but it reflects the reality of life and relationships.

On the other hand, if you appreciate quality rich, mentally stimulating content, this one makes for good conversation.

The themes being explored in this movie are politics, family, gender, and love. Though a somber situation, I found a few instances quite comical.

These tiered levels of characters ensure the story has turns and twists that are unexpected just as they are funny.

The cast is generally older as serves the plot. The casting director did a good job with this production as individuals look like and fit their roles perfectly. We don't see much new talent in leading roles however given the plot, there is not much room for new talent.

I think everyone did a great job in this movie, Omoni Oboli character was my favorite in this production followed by Shaffy Bello. They both have a way of owning their characters that translates to even micro-movements that are unique to the character rather than their person. I also loved the squabbles between the couple - they are plausible and funny and Mofe-Damijo sure gets miffed.

Though jocose, all the characters are quite believable except a gentleman who comes totally covered in Arabic headdress during a political rally.

Technical Construction
The director did a good job of this. The translation of the script visually is good so the movie can be enjoyed by a wide variety of audiences. On occasion the camera shot beyond the crowd, taking away from the intensity of the moment. The lighting, editing, and score were great. I still wonder though whether the Swahili tune is a west African original or East African.

The romantic and dramatic scenes are tastefully done so the movie can be watched by a younger audience and a more varied audience.

Production design: Good. The outfits are quite tasteful, the overall colors, furniture, and mood of the production are great.

This is tasteful. Amongst other things, without being repulsive, it educates us about women in politics and highlights the difficulties they face to stay at the top of their game.

I give this production a 7/10. I think it was well thought through and the team did a good job