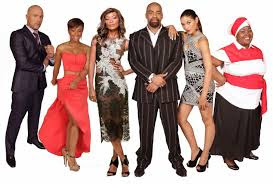 This series is well worth watching - A story of frustrated love at different levels; with parents, siblings, spouses,  workmates and even  God

It has taken me over 5 years to watch this movie because the cover picture on ShowMax is not very inspiring. Produced in 2013, I eventually watched out of curiosity because it kept coming up. I also wanted to see the younger version of some of my favorite Moswana and South African Actors  - quite interesting.

The Story
Themes explored throughout the 4 seasons are love, trust, faith, discipline, and handwork. Later episodes also cover family, corruption, politics, and crime. Season 1 starts on an average tempo, each following season has a heightened pace from the previous ones


This makes the series exciting as opposing worlds collide. However, by the end of season 4 things are moving so fast that I am convinced there are lots of outtakes or the editor just did not know what they were doing. So many gaps such that the credibility of the series is highly compromised.

Season 4 had the most tension, but it felt rushed and the story was left hanging. Earlier episodes, on the other hand, had unnecessary scenes and irritatingly long conversations.

An example is the long and winded conversations between the pastor and Mavis. I think the same could have been achieved without too much repetition.

All said the plot is full of twists and turns especially in the last season, that keep you hooked.

The casting is good. There are a change and addition of characters. This keeps the series interesting through the four seasons.

In season 3 some of the roles are taken by a new cast. For example, Nosipho's role is acted by Dlamini and Khumalo. I think Dlamini did a better job of bringing out the persona of this character. Other changes are with the character Dudu taken by Pheto and Mbuli. I think Terry did a better job though both actors did not seem to return Shona' s energy and passion. Up till season 4  neither did Mbali. I felt they were believable in their roles.

In the last two seasons, we have heightened energy with the coming in of Hlomla and Ncube. Both deliver their roles perfectly. My best characters in the movie are Hlomla, Tango Ncetezo, Ncube, and obviously Shona and Connie. They made their characters plausible.

The movie is a little old so it doesn't fit nicely on some screens.  I think the cinematography is good and so is the production design. The costumes, especially the church uniform is interesting.

Editing: The editing, especially for season 4 is not good. Though with cutouts, the movie should not have felt like large sections of the film were removed.

The best aspect for me of this movie is the theme music. With about 4 instruments the resulting tune feels like the different interwoven layers of relationships the characters have.

Despite the numerous flaws, this series is well worth watching.

I give this production a 7/10. It was entertaining and I was hooked,