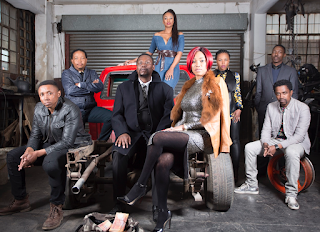 Coming up with a series following this was natural not necessarily ingenious. The possibilities of where the character Chili can be taken are numerous given how he delivered the movie.


In the series, we are given a background of his family and the relationship with his boss that leads to numerous storylines of what happens next after the movie.

As with the movie, the series takes street warfare, law, and order, justice, and retribution to a new level. If you loved the movie you will love the series which is absolutely binge-able though storylines are complete with each episode. The underlying question of whether of not Chili will be found out keeps you absolutely hooked.

In inumber Number series, the backstories of some of the characters in the movie are elaborated. A thug's son turns his life around to be a cop and in the first episode kills his brother who now works for his father the gang is involved in the hijacking, heists murders and the list of crimes keeps getting longer. To catch the criminals Chili decides to get in the circle this results in the death of those helping them.

On the other hand, Skroef, who he defeated but survived in the movie is on his case. He starts a new gang with street hooligans whom he trains in preparation for a showdown. So begins a series of events that lead to more robberies and murders.

I think the cast of this series does a great job.and the tension throughout the series is thrilling as S'Dumo continues to hack the character of Chili. Unlike in the movie, Shoes is more aggressive in the series and Presly continues to carry this role pretty well. He rescues trafficked ladies on his own and goes on the hunt for his family.

I think there is great growth in acting quality for the cast members that appeared in the movie.

The cast of number Number Series

The cinematography is quite good and as with the movie, special attention is paid to camera angles which enhances the tension in different scenes. An example is when Chili picks  the lock in Mr. Skhakan'e house

Suspense is maintained throughout the series. The director brings everything together beautifully. I have enjoyed watching the series though sometimes I felt emotionally drained and frustrated by the characters' situation. Simply meaning the actors did a great job.

I score this series a 7/ 10 Some of the acts with Scroef gangs was not clear.