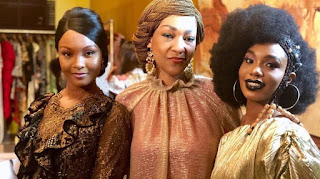 As the name suggests there is a lot of bling. As with most Nigerian 'high budget' productions, the storyline seems to go nowhere and the writing is basic.


There is an effortless attempt at comedy and am sure the cast really has a great time at the production gatherings. However, I don't think it is the best that could have been done to show the 1% of the 1%.


If you are looking for light entertainment, a plot that is not engaging at all then this is it. You will be mindlessly entertained for the duration of the movie but there is nothing memorable about it. Available on Netflix


The Story
Lagos high society families go out of their way to live it up and purchase the most modern, shiniest toys money can buy. From fashion, houses, boats, cars, trips abroad to surgery, nothing is out of reach. Then come the Holloways. While the children are quite practical, the parents are shopaholics to the detriment of the family name that has been respected for generations. When does it stop? But, do they want it to stop?

The script is rather shallow and lacks direction. If the movie is entertaining, it definitely is not because there is a good story to back it up

There are quite a number of interesting lines  my favorites being
Her wrinkles  have wrinkles
I can be reasoned with if you upgrade your IQ to the level where I can be persuaded
It's that time of the month ... my village people are twitting everything I am saying

The movie is star-studded and the actors don't hold anything back in making sense of this runaway script. On the other hand, because everyone is so good and there is no focus, the presence of so many stars creates conflict in appreciating the movie as we do not know from whose perspective the story is being told. Focus is on anyone and anything.

My favorite actors in this include Elvina Ibru, Toyin Abraham, Bisola Aiyeola, and Sharon Ooja. I liked the party where Kiki (Bisola Aiyeola) catches the eye of the Yoruba Demon (Ayoola Ayoola) during the funeral evening event. She always over-delivers naughty lines one would have zero sense of humor not to get it and the cameraman got the angle and focus on Ayoolola just right.

The clumsy meeting between Nnamdi (Alexx Ekubo) and Tonkunboh (Sharon Ooja) is also hilarious and through Ekubo isn't so convincing, Sharon nails her character and is quite interesting to watch. And then there is Toyin Abraham as Dunni Fernandez, she absolutely nailed it.

The Cast of The Bling Lagosians

The cinematography is good and the lighting sound and music are also good. The music was good through the movie - enhancing the comic and tense scenes. I liked most of the design work, but my favorite was Mrs. Holloway's birthday party. The decoration was excellent and so were the clothes.

If the script was better I would be very happy with this film. I feel that much more could have been done.