Jay Jay Okocha: The man, the myth, the legend. 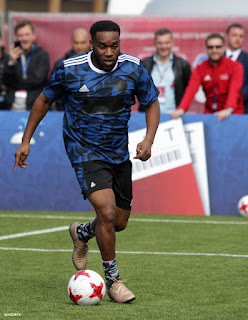 The year is 1993, sometime in the month of August. Eintracht Frankfurt is playing Karlsruher SC in the German top-flight premiership league, Bundesliga. Frankfurt is leading by a mere 2-1, and in comes a quick counterattack. As it develops, a young African receives the pass as he is one-on-one with the great English keeper, Oliver Kahn. A simple shot or lob will do, but not for this African kid. He first feints the keeper who takes a dive and fails spectacularly to stop the shot, then this kid takes the two defenders trailing him, to a deep dark forest. He nutmegs one, feints again before using his left foot to put the ball behind the now dazed keeper along with the sprawling defenders. It isn't just a goal, it is poetry in motion.

So good he is named twice.

But to fully understand this man, we need to go back decades earlier to his formative years growing up in Nigeria. We will be narrating his story chronologically to get a better glimpse of his rise to success.

Before the man: Jay-Jay Okocha

Jay-Jay, is a native of Enugu. In 1973 he is born in Iwo local government, Osun state. Growing up during the era of military rule is precarious. With failing institutions, unemployment, most youths resort to a life of crime and misdemeanors. Jay-Jay finds his passion in football. Like most football hobbyists in Nigeria, Jay-Jay does not not have access to training facilities. Most of his football acumen is from playing with his neighbourhood friends. Jay-Jay and his friends don't even have a ball to begin with, they play with anything ‘kickable’ or round. If they are lucky to find a ball, they thank their stars for such fortune. Street football is not merely about winning. It was mostly about showing off skills — Ball control, feints, nutmegs, leg-overs, speed, and the rest.

And he’s got it! This street football leads him to develop a flashy, dribble-heavy style of play that his South American protege, Ronaldinho adopts. Jay-Jay starts playing for Enugu Rangers (a Nigerian premiership team) at just the age of 17. As an attacking midfielder, Jay-Jay dazzles crowds with his dribbling, field vision, and shot-taking abilities.

Then the big break-it comes when he travels to the then-West Germany to visit a friend playing in the third division league. As fate would have it, when Jay-Jay accompanies his friend to training, he gets to try-out and the young Jay-Jay, dazzles his coach and soon to be teammates and joins the third division.

Jay-Jay's career in Eintracht Frankfurt is arguably his most distinguished club career. This top-flight premiership team puts him on the stage where he displays his magical dribbling feats. Each time he steps into the stadium, the German crowd roars and screams, as he demolishes one defender after the other, he even embarrasses the great Oliver Kahn! His partnership with teammates, Ghanian striker, Tony Yeboah and Thomas Doll, is a lethal combo.

Be it to earn more or improve his career, Jay Jay moves to the Turkish side, Fenerbahce where he is most prolific in his career. He nets 34 goals in 62 appearances for the team. His performance earns him a Turkish citizenship and a Turkish name ‘Mohammed Yavuz’.

After bouncing from a series of clubs, Jay-Jay lands in Paris Saint-Germain in 1998. PSG purchases him for £14 million making him the most expensive African signing at the time. While in PSG Jay-Jay mentors a young Ronaldinho who later refines and popularizes his flashy style of dribbling.

After his stint at PSG, Jay-Jay moves to Bolton Wanderers where he becomes a club legend. He scores a vital goal against West Ham which is ‘the Goal Of The Season’ in the premier league. His exploits lead him to captaining the team to their first cup final in nine years. The fans love him so much that they coined the phrase ‘Jay-Jay; so good they named him twice’.

On the international stage, his football prowess remains unmatched, being part of the vital 1996 Super Eagles team that won gold at the Olympics in Atlanta. He along with legends like Daniel Amokachi, Sunday Oliseh, Kanu Nwankwo, Taribo West, completely dominate the event. They beat the star-studded Argentina, 3-2, the indomitable Brazil, 4-3, with Okocha being integral to the teams' sensational performance. Jay-Jay also led the Super Eagles to the 1994 AFCON (African Cup Of Nations) with his free-kick goal against Algeria in the Super Eagles 4-1 win.

After his time at PSG, he plays one year in Qatar, after which he moves to Hull City via free agency. In Hull City, he helps the team get  to the top-flight English premiership. However, at this point in his career, he is older, slower, injury-prone, and inconsistent. After a year with the Hull City side, he decides to hang his boots; at a decent career run of 89 goals for club and 14 goals for country.

Jay-Jay is a partner with multimillion naira conglomerate, Betking, as it's brand ambassador. With career earnings and other endorsement deals, Jay-Jay has an estimated net worth of about $15 million. Talk about success!

Jay-Jay Okocha has inspired and continues to inspire millions of kids both on the continent and all over the world. His playing style has had a huge impact on aspiring footballers. While critics and ‘football purists’ decry his style as ‘undisciplined’ and ‘inconsistent’, many fans of the game were endeared to him precisely because of those bags of tricks he displayed on the pitch. At a time when racism and prejudice gripped football, Jay-Jay smashed through those barriers to enchant millions of people all over the world.

While Jay Jay Okocha never won the coveted Ballon D'or or even African Best Player award, fans all over the world still rank him among the absolute best Africans to ever lace up. The great Pele ranked him in his top 125 football players of all-time. He remains a legend and his contributions to African football history will be forever etched in our hearts.