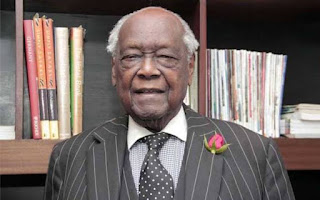 So  Charles Njonjo left us this morning at age 101. He was cremated fast and that hardly gave us the time to mourn him but given his last years have been quiet,  I suppose it was the right thing to do.

There are events that happen in your life that change your perspective on issues. For me Charles Njonjo was one of of those. He made me a better Kenyan.  As a young luo adult I did not hear anything positive about him in my youth. I suppose all the stories about any  kikuyu leader at the time were negative.

I was very industrious as a young adult and did not delve much in politics so my opinions were formed by what I heard from adults around me. Well, joining university meant I had to give up some of the little businesses I was doing back home and get something that paid well without taking all  my time.

In my second and third years I decided to give tuition and went decided to see if there were any people who need tutors. The place to check then was at Sarit center notice board. I was lucky enough to get an advert that had been posted a few weeks earlier.

I responded to the ad but was disappointed that after several telephone interviews the lady did not make an effort to meet me. I was to tutor her step nephew niece. However the Mzee would come to talk to me according to the house keeper. Surprise surprise who was the Mzee?... Charles Njonjo! Given what I had heard I can assure you I almost quit before meeting him. I did not want to be associated or work for such a man!

I had all these corrupted opinions of who he was and expected that I would be treated badly as this was a live-in tutoring position. But he just removed the wind from my sails. First he was like excited to meet me he spoke to me like a long lost relation. He personally came to check my room, asked if I was comfortable and even sat on the bed to ensure it was just like I wanted. He asked me about school and never for a second questioned whether I could deliver the tuition which made me really confident.

Let's just say his actions made me question preconceived perceptions I had of him.  I had thought so negatively of him but meeting him in person made me realize that you do not form opinions of anyone from what you hear but from repeated action towards you and others. Since then, I have learnt to analyze people for myself and often seek the positive side of anyone I meet. I also do not unnecessarily personal about criticism and opinions others have of me. They may not know the true me and have not met what a great person I am :-)

All said, this changed my life's course because at the end of it all it is this positive attitude towards people that opened up doors for me and brought relationships in my path that would not have opened under any other circumstances or with a negative attitude.

It  made it possible for me to run programs and have the confidence to approach leaders  I would never have. I say all this to say, you never know how your actions are impacting the people around you and that things you may not consider important may actually be the very things that change the course of one's life and their perception of community and country.