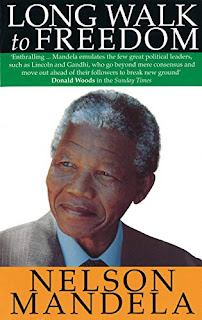 “Long Walk to Freedom ‘’ is the 1994 collection of periodicals of Nelson Mandela. It recognizes his rising from an adversary of politically supported, racial segregation and lobbyists. The Robben Island-kept mental oppressor, to ANC boss and a social picture. The single diary scattered for the length of Mandela’s life. This modernized book is a testimony to the significance of the dull head of South Africa.

This is a riveting story of Nelson Mandela. It explains the series of experiences that led to meaningful judgments that led to his battle to freedom over apartheid and the colonizers.

Mandela was an adopted son of a Tembu chief, he grew up between two worlds; in the traditional culture of his tribe and the hostile realities of a white-dominated country. As a child his political awareness motivated his interest in law and encouraged him  to eventually become politically active. He was instrumental in the formation of the ANC Youth League. In The 950s, he launched a campaign of resistance against the discriminatory policies of the South African government. In the favor of none violent opposition to the apartheid government. After the Sharpeville massacre in 1960, his position changed. He went into hiding to avoid imposed ban on ANC activities.

What are the perks of getting a grasp on this book?

I would recommend this book in light of the following facts;

The Long Road after Freedom through Solon tells the representation of whether the colonizer met a terrible character in an African country. In any case, the lawmaker did not deviate between the least beyond his inflexible explanation. That often did no longer deliver interest in imitation of adapting, discipline yet generally negotiating. His humble type, or informative character has been noticed then identified as much abuse by means of his most ripe enemies. In some cases, his body whilst in prison used to no longer be a short spirit in his worried system, clearing up problems.

The Long walk to Freedom is a compelling story of an epic life, a story of hardship, endurance, and eventual victory told with clarity and articulateness of a born leader.

Which individual should pursue this book?

If you are interested in understanding Apartheid and the intentional segregation of Africans and the systems set up to make it work, alongside the story of Nelson Mandela this is a great read

According to the book, youth have to take it upon themselves to make certain that they obtain the very best schooling available to them if they are to change their destiny alongside that of their country and communities.